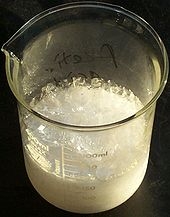 The acid most commonly associated with vinegar. Acetic acid is a two-carbon carboxylic acid. Its formula is: CH3COOH. It is the most commercially important organic acid and is used in the manufacture of a broad range of chemical products, such as plastics and insecticides.

Acetic acid is one of the simplest carboxylic acids.  It is an important chemical reagent and industrial chemical, used in the production of polyethylene terephalate mainly used in soft drink bottles, cellulose acetate, mainly for photographic flim, and polyvinyl acetate for wood glue, as well as synthetic fibers and fabrics. In households, diluted acetic acid is often usede in descaling agents.In food industry,acetic acid is used under the food additive code E260 as an regulator and as a condiment.

Acetic Acid is colourless water like liquid that has a piercingly sharp, vinegary odour and burning taste.

Acetic Acid is mainly used in the manufacture of following chemicals:

Precautions should be directed towards the prevention of Acetic Acid coming into contact with the skin or eyes.  Suitable protective clothing, including goggles or face shield, Rubber or PVC gloves and boots must be worn when handling Acetic Acid and adequate ventilation should be provided.