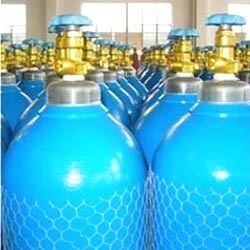 Ammonia is a compound of nitrogen and hydrogen with the formula NH3. It is a colourless gas with a characteristic pungent odour. Ammonia contributes significantly to the nutrirional needs of terrestrial organisms by serving as a precursor to food and fertilizers. Ammonia, either directly or indirectly, is also a building block for the synthesis of many pharmaceuticals. Although in wide use, ammonia is both caustic and hazardous. In 2006, worldwide production was estimated at 146.5 million tonnes. It is used in commercial cleaning products.

Ammonia, as used commercially, is often called anhydrous ammonia. This term emphasizes the absence of water in the material. Because NH3 boils at −33.34 °C, (-28.012 °F) the liquid must be stored under high pressure or at low temperature. Its heat of vapourization is, however, sufficiently high so that NH3 can be readily handled in ordinary beakers, in a fume hood (i.e., if it is already a liquid it will not boil readily). "Household ammonia" or " ammonium hydroxide" is a solution of NH3 in water. The strength of such solutions is measured in units of baume (density), with 26 degrees baume (about 30 weight percent ammonia at 15.5 °C) being the typical high concentration commercial product. Household ammonia ranges in concentration from 5 to 10 weight percent ammonia.

Ammonia has a reasonable liquid range (-77 to –33 °C), and as such it can be readily liquefied with dry ice (solid CO2, Tsub = -78.5 °C), and handled in a thermos flask. Ammonia’s high boiling point relative to its heavier congeners is indicative of the formation of strong hydrogen bonding, which also results in a high heat of vaporization (23.35 kJ/mol). As a consequence ammonia can be conveniently used as a liquid at room temperature despite its low boiling point.