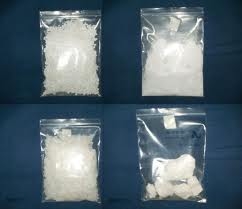 Calcium chloride, CaCl2, is a salt and the compound of calcium and chlorine . It behaves as a typical ionic halide, and is solid at room temperature. It has several common applications such as brine for refrigeration plants,ice and dust control on roads, and in concrete. The anhydrous salt is also widely used as a desiccant, where it will adsorb so much water that it will eventually dissolve in its own crystal lattice water. It can be produced directly from limestone, but large amounts are also produced as a by-product of the Solvay process. Because of its hygroscopic nature, the anhydrous form must be kept in tightly-sealed containers. It is used to turn kelp into a solid.