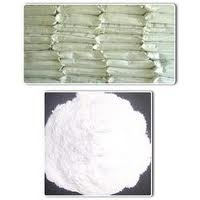 Chalk powder is a soft, white, porous sedimentary rock, a form of limestone composed of the mineral calcite. Calcite is calcium carbonate or CaCO3. It forms under relatively deep marine conditions from the gradual accumulation of minute calcite plates shed from micro-organisms called coccolithophores. It is common to find chert or flint nodules embedded in chalk. Chalk can also refer to other compounds including magnesium silicate and calcium sulfate.

Chalk is resistant to weathering and slumping compared to the clays with which it is usually associated, thus forming tall steep cliffs where chalk ridges meet the sea. Chalk hills, known as chalk downland, usually form where bands of chalk reach the surface at an angle, so forming a scrap slope. Because chalk is porous it can hold a large volume of ground water, providing a natural reservoir that releases water slowly through dry seasons.