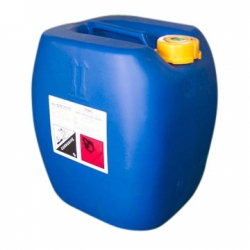 Hydrogen peroxide (H2O2) is an oxidizer commonly used as a bleach. It is a clear liquid, slightly more viscous than water, that appears colorless in dilute solution. It is used as a disinfectant, antiseptic, oxidizer, and in rocketry as a propellant. The oxidizing capacity of hydrogen peroxide is so strong that it is considered a highly reactive oxygen species.

Hydrogen peroxide is naturally produced in organisms as a by-product of oxidative metabolism. Nearly all living things (specifically, all obligate and facultative aerobes) possess enzymes known as peroxidases, which harmlessly and catalytically decompose low concentrations of hydrogen peroxide to water and oxygen.