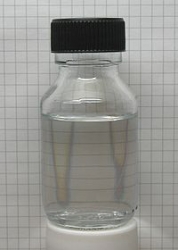 Butanone, also known as methyl ethyl ketone or MEK, is an organic compound with the formula CH3C(O)CH2CH3. This colorless liquid ketone has a sharp, sweet odor reminiscent of butterscotch and acetone. It is produced industrially on a large scale, and also occurs in trace amounts in nature. It is soluble in water and is commonly used as an industrial solvent.

As a solvent
Butanone is an effective and common solvent and is used in processes involving gums, resins, cellulose acetate and nitrocellulose coatings and in vinyl films. For this reason it finds use in the manufacture of plastics, textiles, in the production of paraffin wax, and in household products such as lacquer, varnishes, paint remover, a denaturing agent for denatured alcohol, glues, and as a cleaning agent. It has similar solvent properties to acetone but has a significantly slower evaporation rate. Butanone is also used in dry erase markers as the solvent of the erasable dye.

As a welding agent
As butanone melts polystyrene, it is sold as "polystyrene cement" for use in connecting together parts of scale model kits. Though often considered an adhesive, it is actually functioning as a welding agent in this context.

Other uses
Butanone is the precursor to methyl ethyl ketone peroxide, a catalyst for some polymerization reactions.

Butanone can react with most oxidizing materials, and can produce fires. It is moderately explosive; it requires only a small flame or spark to cause a vigorous reaction. Butanone fires should be extinguished with carbon dioxide , dry chemicals or alcohol foam. Concentrations in the air high enough to be flammable are also intolerable to humans due to the irritating nature of the vapour