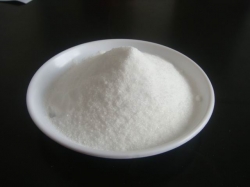 Potassium chloride (KCl) is a metal halide salt composed of potassium and chloride. In its pure state, it is odorless and has a white or colorless vitreous crystal appearance, with a crystal structure that cleaves easily in three directions.Potash varies in color from pink or red to white depending on the mining and recovery process used. White potash, sometimes referred to as soluble potash, is usually higher in analysis and is used primarily for making liquid starter fertilizers. KCl is used in medicine, scientific applications, and food processing. It occurs naturally as the mineral sylvite and in combination with sodium chloride as sylvinite.

The majority of the potassium chloride produced is used for making fertilizer, since the growth of many plants is limited by their potassium intake. As a chemical feedstock, it is used for the manufacture of potassium hydroxide and potassium metal. It is also used in medicine, lethal injections,scientific applications, food processing, and as a sodium-free substitute for table salt (sodium chloride). It is sometimes used in water as a completion fluid in petroleum and natural gas operations, as well as being an alternative to sodium chloride in household water softener units.