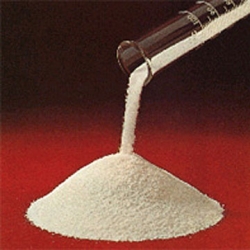 Soda ash is the common name for sodium carbonate, a chemical compound frequently used in manufacturing, industry, and even around the house. Glass production is one of the primary uses for sodium carbonate. Detergents and cleaning agents may also make use of it, and it can be used in cooking or as a food additive, as well.

Soda ash is a very common industrial chemical as well. In addition to food and cosmetic products, it's also used in fertilizers. When it comes to exhaust towers and chemical stacks, this ash can play a very important role in air purification because when sodium carbonate reacts with sulfur dioxide and hydrochloric acid, for example, less harmful compounds are produced.

Sodium carbonate is known by the chemical formula Na2CO3, in reference to the elements that make up its base composition: Na, which is sodium or salt; C, which is carbon and O, which is oxygen. The Na2CO3 combination does not usually occur in isolation in nature, however, so it must be intentionally refined by scientists.

There are two main ways of refining sodium carbonate. Trona, a mineral that occurs in natural deposits in evaporated lake beds throughout the world, is the most common source. Some salt water also contains sodium carbonate compounds. To extract the ash, scientists usually subject the trona ore or salt water to different crushing, heating, spinning, and other techniques.

Sodium carbonate is generally regarded as a safe substance. It can be handled without extraordinary precautions, and the United States Food and Drug Administration has deemed it safe for human consumption in all its forms. Those working to extract the compound from raw ore or in labs should wear masks, however, as prolonged exposure to any powder particulates can be harmful.