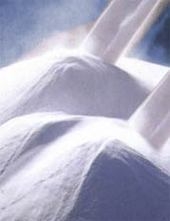 It would be hard to go anywhere in today's world without being close to a product produced with or containing soda ash, because soda ash, known chemically as sodium carbonate (Na2CO3), is used virtually everywhere and has been a key raw material for thousands of years. Soda ash has significant economic importance because of its applications in manufacturing glass, chemicals, paper, detergents and many other products.

In several of these applications, soda ash and caustic soda are interchangeable raw materials. However, soda ash typically has a cost advantage over caustic soda, which has historically demonstrated more dramatic price fluctuations.