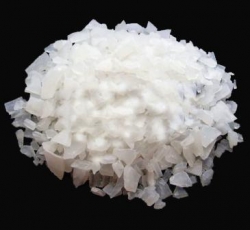 Sodium aluminate is an important commercial inorganic chemical. It works as an effective source of aluminium hydoxide for many industrial and technical applications.

Sodium Aluminate Powder is in connection with water treatment and is based on its property of forming flocculent precipitates of Aluminum Hydroxide which are capable of coagulating, entraining and absorbing finely divided suspended solids & colored materials. It forms a useful adjunct to the lime Soda softening process, particularly when magnesium is also present in water. Our powdered Sodium Aluminate is available at affordable prices. We are also one of the prominent Sodium Aluminate suppliers in India.

In water treatment it is used as an adjunct to water softening systems, as a coaqulant aid to improve flocculation, and for removing dissolved silica and phosphates.

In construction technology, sodium aluminate is employed to accelerate the solidification of concrete, mainly when working during frost.

Sodium aluminate is also used in the paper industry, for fire brick production, alumina production and so forth.

Sodium aluminate solutions are intermediates in the production of zeolites.