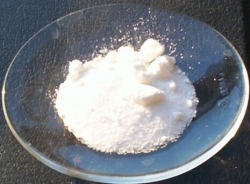 Sodium metabisulfite or sodium pyrosulfite is an inorganic compound of chemical formula Na2S2O5. The substance is sometimes referred to as disodium (metabisulfite). It is used as a disinfectant,antioxidant and preservative and agent.

When mixed with water, sodium metabisulfite releases sulfur dioxide (SO2), a pungent, unpleasant smelling gas that can also cause breathing difficulties in some people. For this reason, sodium metabisulfite has fallen from common use in recent times, with agents such as hydrogen peroxide becoming more popular for effective and odorless sterilization of equipment. Released sulfur dioxide however makes the water a strong reducing agent.