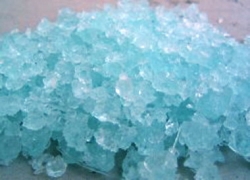 Sodium silicate is the common name for a compound sodium metasilicate, Na2SiO3, also known as water glass or liquid glass. It is available in aqueous solution and in solid form and is used in cements, passive fire protection, refractories, textile and lumber processing, and automobiles. Sodium carbonate and silicon dioxide react when molten to form sodium silicate and carbon dioxide:

Water glass is used as coagulant / flocculant agent in waste water treatment plants. Waterglass binds to colloidal molecules, creating larger aggregates that sink to the bottom of the water column. The microscopic negatively charged particles suspended in water interact with sodium silicate. Their electrical double layer collapses due to the increase of ionic strength caused by the addition of sodium silicate (doubly negatively charged anion accompanied by two sodium cations) and they subsequently aggregate. This process is called coagulation / flocculation.

Sodium silicate is used, along with magnesium silicate, in muffler repair and fitting paste. When dissolved in water, both sodium silicate, and magnesium silicate form a thick paste that is easy to apply. When the exhaust system of an internal combustion engine heats up to its operating temperature, the heat drives out all of the excess water from the paste. The silicate compounds that are left over have glass-like properties, making a temporary, brittle repair.