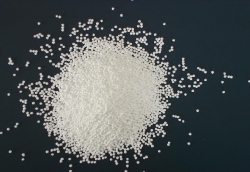 Sodium benzoate has the chemical formula NaC6H5CO2. It is the sodium salt of benzoic acid and exists in this form when dissolved in water. It can be produced by reacting sodium hydroxide with benzoic acid.

Sodium benzoate is a preservative. It is bacteriostatic and fungistatic under acidic conditions. It is used most prevalently in acidic foods such as salad dressings (vinegar), carbonated drinks (carbonic acid), jams and fruit juices (citric acid), pickles (vinegar), and condiments. It is also found in alcohol-based mouthwash and silver polish.Sodium benzoate is declared on a product label as 'sodium benzoate'.

It is also used in fireworks as a fuel in whistle mix, a powder that emits a whistling noise when compressed into a tube and ignited. The fuel is also one of the fastest burning rocket fuels and provides a lot of thrust and smoke. It does have its downsides, there is a high danger of explosion when the motor is pressed because of the fuel's sensitivity to impact. That is why only professional pyrotechnicians should make it.