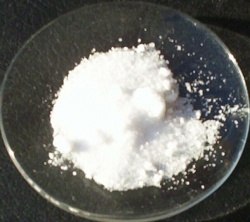 Sodium bromide, also known as sedoneural is a salt with the formula NaBr, widely used as an anticonvulsant and a sedative in the late 19th and early 20th centuries. Its action is due to the bromide ion (potassium bromide is equally effective). It is a high-melting white, crystalline solid that resembles sodium chloride. It is a widely used source of the bromide ion.

NaBr is used in conjunction with chlorine as a disinfectant for swimming pools.