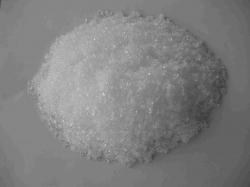 Sodium nitrate is the chemical compound with the formula NaNO3 . This salt, also known as Chile saltpeter or Peru saltpeter (due to the large deposits found in each country) to distinguish it from ordinary saltpeter, potassium, is a white solid which is very soluble in water. The mineral form is also known as niratine, nitratite or soda niter.

Sodium nitrate may be used as a constituent of fertilizers, pyrotechnics and smoke bombs, glass and pottery enamels, as a food preservative and a solid rocket propellant. It has been mined extensively for these purposes.

Sodium nitrate was used extensively as a fertilizer and a raw material for the manufacture of gunpowder in the late 19th century. It can be combined with iron hydroxide to make a resin.

Sodium nitrate should not be confused with the related compound, sodium nitrite. Sodium nitrate in the brine gives cooked corned beef its classic reddish color (without it corned beef comes out gray), and it kills botulism spores. Nitrate is actually changed to nitrite by bacterial action during processing and storage and nitrate itself has no effect on meat color.

It can be used in the production of nitric acid by combining it with sulfuric acid and subsequent separation through fractional distillation of the nitric acid, leaving behind a residue of sodium bisulfate.Hobbyist gold refiners use sodium nitrate to make a hybrid aqua regia that dissolves gold and other metals.